Home → Articles → Failure of Democracy in Myanmar: What Went Wrong? 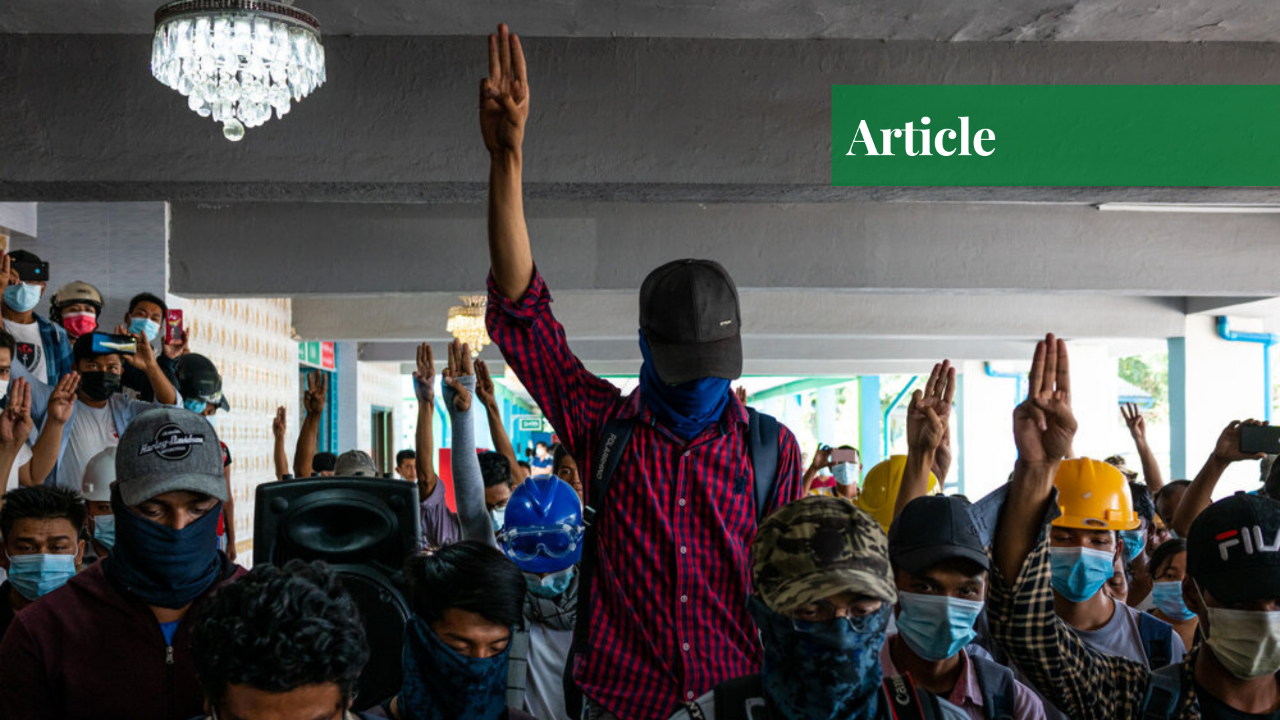 Failure of Democracy in Myanmar: What Went Wrong?

The author seeks to explain the democratic insufficiencies and the violation of civil and political rights in Myanmar against a backdrop of Martin Luther King Jr.’s words. The violence against the minorities – particularly the Rohingya Muslims – has unveiled cracks that lay just beneath the surface of Myanmar’s so-called ‘democracy’.

Martin Luther King Jr. was the pacifist leader of the civil rights movement of the 1960s in the United States. He was put behind bars for his non-violent protests and demonstrations in the Birmingham jail. From his cell of imprisonment, King wrote an open letter to the people of the United States and explained his desire for equality, an end to segregation and racism, and the philosophy of justice that lay at the heart of his struggle.

It was in that “Letter from a Birmingham Jail” that King Jr. penned those words of warning for those who see injustice and do not act. If one is incisive enough and does not suffer from memory lapses, one can gather how silence on injustice fuels the confidence of its perpetrators, which then allows them to continue being unjust.

Today, the words of Martin Luther King Jr. hold bitter relevance for the people of Myanmar, as they are being subjected to live fire by their military; the police, too, stop them from protesting against the February 1 coup. Here, one must ask why the people of Myanmar did not reign in their military and hold the government of Aung San Suu Kyi responsible for staying mum on the atrocities that Rohingya people were subjected to, only a few years ago.

The Ones Who Control

Tatmadaw is “Burmese” for Armed Forces. It is also the official name of Myanmar’s Army which was founded by Aung San Suu Kyi’s father after independence from the British, back in 1948. Historically, it has played a dominant role in Myanmar politics. From 1962 to 2011, Myanmar had been under direct military rule.

The recent military coup came after elections in November of 2020 gave a landslide victory to Aung San Suu Kyi’s party, the National League for Democracy (NLD). The opposition claimed electoral fraud and wanted reelections, whereas the election commission backed the electoral results. The military then backed the claims of the opposition.

When Aung San Suu Kyi did not relent, the Generals took the matter into their own hands and executed a putsch — a textbook case of power politics. Soon after the coup, protestors took to the streets and demanded the restoration of the civilian government. The generals promised a return to civilian rule after free and fair elections, but nobody knows when that time will come.

Blood and Protests: Is Democracy in Myanmar Near?

The Tatmadaw has imposed an emergency for a period of one year. Born and bred in a military state, the Generals responded to the protests in the only way they knew best. They unleashed the brutal force of the security apparatus on protestors with the firing of live rounds. The number of protestors killed has already passed 700.

Also Read:  An Analysis of Solid Waste Management in Karachi

27th March was the deadliest day, with 114 protestors killed in a single day. With each passing day, the stakes of the deteriorating situation in Myanmar are increasing. The conflict may spill over into neighboring territories, if not handled properly by the outside powers. The usurpation of power by the army should be condemned by all and sundry, without any qualifications.

The brutal killings of peaceful protestors have once again highlighted the dilemmas faced by militarized societies. It would be of interest here to understand why democracy failed again in Myanmar when its experiment from 2012 to 2020 seemed like the start of a new era in its history. Democracy flourishes where there is a constant tug of war between state and society.

Individual and the State

Also, the mettle of society should be inclusive. It should not be discriminating against relatively minor segments of society. The assertion of societal pressure on the acts of states is necessary if democracy is to flourish; this has been the argument of Daron Acemoglu and James A. Robinson in their book “The Narrow Corridor: States, Societies and the Fate of Liberty,” which argues that liberty resides in a narrow corridor.

On one side is the state with all of the legal, political, economic, and administrative machinery at its disposal. While on the other side is the society that has to constantly wrest its rights from the state and assert its freedom through participation. This constant tug of war between states and societies keeps liberty secure inside the narrow corridor.

If the society gets weak or gives up its responsibility in face of the usurpation of its rights by the state, then the state gets stronger by feeding on the rights of its people. Thus, states grow strong and it becomes difficult to maintain liberty. As we are witnessing in the case of Myanmar, Generation Z protestors have erected pickets for their own defense and started using slingshots to target government forces.

Both sides are showing signs of defiance and standing their ground. How things turn out is still to be seen, but it would be informative to mention that in the protests of 1988, when Aung San Suu Kyi rose to prominence, the military junta killed around 3000 civilians. So, Tatmadaw has a history of killing civilians and this time may not be so different.

Reverting back to the original words from King Jr., one finds in them uncanny relevance with the recent history of democracy in Myanmar of the last few years, when placed in the theoretical framework provided by Acemoglu and Robinson, to understand the smoldering fate of democracy in Myanmar. It was only in August 2017 that the Tatmadaw cracked down on Rohingya Muslims discriminately in response to attacks on police posts by Arakan Rohingya Salvation Army (ARSA) militants.

This caused a mass exodus of Rohingyas from the Rakhine state in western Myanmar to Bangladesh. What should have been a government’s response to militant groups, their hideouts, and their abettors, turned into a state-sponsored mass slaughter of people without a state. It is necessary to mention that Rohingyas have never been accepted as full-fledged citizens of Myanmar.

A few intermittent, half-hearted attempts have been made in the past to recognize their nationality but, by and large, they are considered Bengali refugees. United Nations and other human rights groups called the crackdown “a textbook example of ethnic cleansing” committed with a “genocidal intent.”

Instead of reigning in the genocidal actions of Tatmadaw, she defended the military for the actions it committed against the Rohingyas. When playing only for the sake of power, one is liable to forget the devils one creates along the way. To better understand what happened here, we need to go back to the framework of the narrow corridor.

Their fight for justice for Rohingya would have helped to strengthen the fragile democracy of Myanmar. Instead, they wasted the opportunity and stayed silent on the war crimes committed by the Tatmadaw. This again aroused the dormant tendencies of the military establishment to wrest power like in the past.

What Will Become of Myanmar?

Today, while Aung San Suu Kyi is under house arrest and the people of Myanmar being subjected to live fire, must be thinking that they have been denied justice by the usurpation of power by the military junta. Here, then, King Jr’s words, that “injustice anywhere is a threat to justice everywhere” ring hauntingly true.

In the case of Myanmar, the injustice which was meted out to the Rohingyas was not far from the capital city Nay Pyi Taw, which is Burmese for “Abode of Kings.” It was in the same country that Rohingyas were subjected to genocide, committed by the same military which is now responsible for killing “legal” civilians of mainland Myanmar.

People of Myanmar and its democratic government could not see the threat from the Tatmadaw when it was wantonly committing the pogrom. Had they remembered the words of King Jr. and stood up to the war crimes of their military against the helpless, stateless, and already persecuted people, Burmese people might not have had to witness this day.

Democracy is not an easy word and less so its practice in letter and spirit. It is a dynamic phenomenon sustained through the persistent oversight of various pressure groups. The real world has only come close to implement a political variant of democracy. The political-democratic government of Myanmar succumbed to myopia that results from power-wielding. It fed the beast in its backyard and now the beast has come to chase it.

Already signs of armed resistance have started to appear in this conflict of liberty and power. Wise people learn lessons from their mistakes, and still wiser people learn lessons from the mistakes of others. The people of Myanmar deserve every right to have a civilian democratic government; they have every right to protest against the illegal usurpation of power by the Generals.

Power must be returned to the people of Myanmar so that democracy and rights could be protected. Nevertheless, honest deliberation and difficult questions must always be asked, so as to have the insight to make better choices. 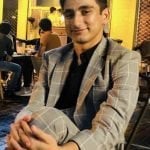 Mr. Uzair Bin Farid completed his undergraduate degree from Quaid-e-Azam University before pursuing his Master's in Economics from IBA Karachi. He has a keen interest in IR, global politics, and strategic issues.

Next Story
What is Olympic Diplomacy?: The Case of the 2022 Winter Olympics 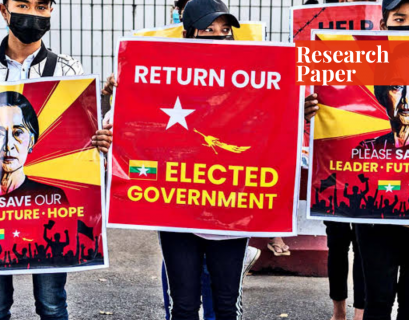 The paper discusses the inequities that have continued to exist within Myanmar’s infrastructure since the colonial era. The unrestrained hostility among Myanmar’s ethnicities has caused one of the world’s largest refugee crises. The author presents methods of conflict resolution that may prove effective in resolving the Rohingya conflict.
Read More → 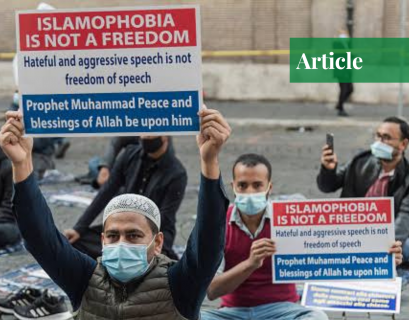 The Rising Tide of Islamophobia in France

In the last decade, Islamophobia has been on the rise in France. The situation worsened after the French president, Emmanuel Macron, called Islam a “religion in crisis”, defended blasphemous caricatures, and declared that he would make Islam “compatible” with French republican values and liberate it. The author notes that although the French government claims that it introduced policies like the hijab ban and the religious disassociation in schools, offices, and public areas, to curb radicalism, separatism, and Islamism, they marginalized the entire Muslim community in France. The author asserts that France witnessed a 53% increase in religious violence last year, and if the gap between the French Muslims and the rest of France continues to increase, the Muslim population will become easy targets for terrorist organizations.
Read More → 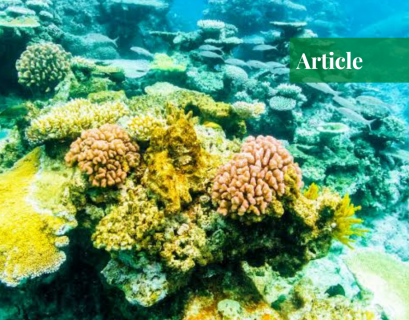 The Great Barrier Reef, one of the seven natural wonders of the world and a World Heritage-listed site, is witnessing the destruction of its reefs by the Australian government and India’s Adani Group. Protests and movements by various NGOs and international institutions are spurring the need for conservation initiatives and projects.
Read More → 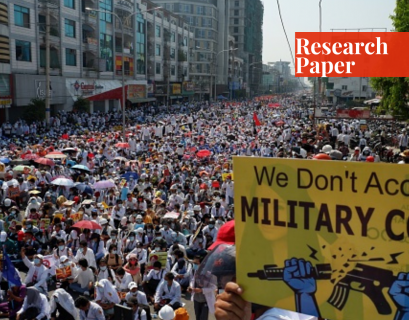