Prime Minister Abiy faces retaliation for disregarding Tigray’s leaders, causing a gaping chasm between the ethnic groups. This deliberate ignorance will lead to his undoing.

When the whole world was fixated on the U.S. Presidential Elections, Ethiopia was oscillating between optimism and a deadly civil war. The manifestations of this looming danger appeared on 4th November when Ethiopian Prime Minister and a Nobel Peace laureate, Abiy Ahmed, went lethal towards the Tigray region.

His military offensive against Tigray People’s Liberation Front (TPLF), the dominant ruling elite of Tigray, came on account of an alleged attack and theft of military assets from the military camp of Northern Command. Tigray leaders denounced this allegation and responded negatively by claiming that Abiy himself was concocting a story to vindicate his authoritarian move of sending troops in the region backed with aerial attacks.

Born in Western Ethiopia, Abiy Ahmed joined the resistance forces against the erstwhile brute regime of Marxist leader, Mengistu Haile Mariam. As a teenager, Abiy enlisted himself in the armed forces. In 1998, he was a radio operator attached to one of the units of Ethiopia which was fighting against Eritrean forces. He was saved when his unit was brutally wiped out while he was out of his foxhole fixing antenna reception.

His charisma and energy brought him up from the ranks of military intelligence, eventually swapping the army for academic studies. His doctorate in peace and security studies led him into the stint of running the Ethiopian Cyber-intelligence Service. Making his way out of the military outfit, he positioned himself for politics as he got promoted rapidly through the ruling coalition, Ethiopian People’s Revolutionary Democratic Front (EPRDF), which had been ruling the country for nearly three decades after deposing Mengistu in 1991.

The repressive and cruel rule of TPLF, one of the dominant factions of the ruling coalition, caused the anti-government protests. Backing these protests while stimulating a reformist attitude, Abiy came into power in 2018. As his energetic self impressed upon thousands, Abiy reversed the old roughshod rule of TPLF and reshuffled his cabinet, fired controversial figures of bureaucracy, cultivated ties with hostile neighbors, reached out to his rivals, lifted media bans, freed thousands of political prisoners, and effectively catered partial privatization of massive state-owned organizations.

Abiy and the TPLF

The long-drawn feud between Eritrea and Ethiopia was eventually curbed in 2019 which became a catalyst in receiving the Nobel Peace Prize. Unfortunately, PM Abiy failed to account for the diverse ethnic tensions that have been contaminating the Ethiopian political currents for decades. Facing the backlash, Abiy turned aggressive towards the menace that the TPLF forged within the deep tremors of the society.

Multiple issues have surfaced since Abiy’s assumption of power in 2018. The major source of discontent between the federal government and TPLF came when Abiy dissolved the ruling coalition and merged them into a single national party, Prosperity Party (PP). In a wider push against TPLF, Ethiopian Parliament stripped off 39 members including Tigray’s President, Debretsion Gebremichael, of immunity from prosecution.

This came amid tensions over TPLF refusing to join the PP on grounds that Abiy was trying to revise the arrangement upon which the federation was currently held. These grievances surfaced when the TPLF went ahead with regional elections in September in defiance of a decision by the federal government to postpone elections due to the coronavirus pandemic. Their skepticism entails that Abiy’s government is trying to extend his mandate while using unfair attempts to drag Tigrayan leaders into the limelight by associating them with purges and corruption allegations.

And History Repeats Itself

This ill-will created multiple tremors within the coalition. Tsedale Lemma, editor-in-chief of the independent Addis Standard news magazine of the Ethiopian capital, remarks that Abiy has lost most of his support base in Oromia, while in the south he has left the political order deeply disoriented. The EPRDF is a coalition of four unequal partners, including the Amhara National Democratic Movement, Oromo People’s Democratic Party (OPDO), and the TPLF.

Apparently, each party is meant to represent their vested interests that may align with their ethnic superiority in the particular region they are representing within EPRDF. On paper, Ethiopia is the federation based on decentralized ethnic representation, whereas on pragmatic grounds Tigrayans, through TPLF, seem to dominate in all spectrums ranging from politics and economics to social and military.

The junta of the Tigray region, which is home to about 6 percent of over 110 million compatriots, has been dominating the popular votes such that the TPLF gains the same vote as the OPDO which represents ethnic Oromos, constituting 40% of the total population. Abiy is the first leader of Oromo descent who led anti-government protests that eventually led to his appointment as Prime Minister.

During the TPLF dominant rule for almost three decades in Ethiopia, Oromos were held back in all facets of democracy: the economic, social, political, and military fronts. More than half of the Ethiopian military forces consist of soldiers of Tigrayan descent and in current hostile times, they will defend the Tigray region against the military offensive of the federal government.

Another major point of discontent between the two opposing sides is the dissolution of the decades-long tensions in the North-Ethiopian border. After coming to power in 2018, Abiy Ahmed established a peaceful settlement between Ethiopia and Eritrea. This became possible on the common grounds that have favored both Abiy and Isaias Afwerki, the authoritarian leader of Eritrea.

Both leaders have no affection for Tigray leaders, who claim that the Eritrean military forces are trying to intervene in the already hostile Tigray region. The mutual enmity between Afwerki and the TPLF goes way back, but it wasn’t always like this. Eritrean People’s Liberation Front (EPLF), co-founded by Afwerki himself, fought along with the TPLF against Ethiopia’s military government of Mengistu from 1975 till 1991.

However, in 1998, things went topsy-turvy over the complex territorial, economic, and political disputes that crushed tens of thousands and displaced millions. In recent skirmishes between the EPRDF and the TPLF, a lot is at stake. Tigray’s neighboring state of Amhara also has long-standing issues regarding the border with TPLF. Amhara state has claimed over part of Tigray. Amharan leaders are motivating Abiy to take firm action against TPLF leaders which could, in turn, fan ethnic conflagrations elsewhere in Ethiopia.

Apart from that, Oromo leaders, who are currently dominating the federal government, have spoken ill of Tigray and its leaders. Oromo activists have been demanding more power and autonomy in the region which has been inaccessible to them despite their ethnic majority and hence led them to undertake hostile endeavors in multi-ethnic towns and cities in Oromia. The director of Nairobi Think Tank, Hassan Khanneje, claims that if the current hostility of Abiy Ahmed does not de-escalate, it would become a harbinger of Ethiopia’s balkanization.

It means that if the ethnic tensions of 10 semi-autonomous regions of Ethiopia are not addressed then it may drift Ethiopia away to the end of its nation-state system where the center would render itself weaker and the power will dissipate leading to the secession of the semi-autonomous regions. It may become another Yugoslavia. Tensions have quadrupled not only for Ethiopia but for the entire Horn of Africa. More than ten thousand Ethiopians have already fled to Sudan.

A Visitation of the Civil War

Among them, it has been reported that 50% are children, according to the UN Refugee Agency. Seeking to calm the tensions in the region, UN Secretary-General, Antonio Guterres, in a tweet, warned about the grim picture of the stability of Ethiopia and how it was important for the entire Horn of Africa region.

Observers from veritable organizations apprised of possible danger to the most strategic military outpost in Africa, Djibouti, where several global hegemons, including China and the United States, continue to operate their military bases. The Horn of Africa is also a few miles off the water crossing away from Yemen and the rest of the Arabian Peninsula, which, if ever seemed to be perturbed by this conflict, would take on unprecedented measures to establish their clout over this staggering world.

Also Read:  The Destiny of Freedom in the West

There’s a looming danger that if the federal government of Ethiopia continues to entangle with TPLF, it would derail their backing of the Somalian government which has been trying to suppress Al-Shabab militants, a declared terrorist outfit of Somalia. Across Ethiopia, more than 7 million people face food shortages and the speed of new arrivals has exacerbated the risk to provide aid beyond the current capacity.

About 600,000 people in Tigray alone are dependent on food aid and due to current tensions, both ingress and egress are on halt for humanitarian organizations to fund their aid. The UN Refugee Agency claimed that the specter of food shortage has already wielded its power over Tigray, apart from being the worst-hit desert region from locust infestation.

Amnesty International has not yet confirmed the culprit behind the fire-starter but through witnesses, it has confirmed that forces loyal to TPLF resorted to mass killings after facing defeat at the hands of the Ethiopian military forces. If the saner minds fail to prevail soon, the military prowess on both sides would lead the parties to not only wreak a heavy toll on the civilians but on the neighboring countries as well. Unless Abiy Ahmed transforms his actions back on his “peace” mindset, Ethiopia is heading towards a civil war.

Next Story
The Belt and Road Initiative for Pakistan 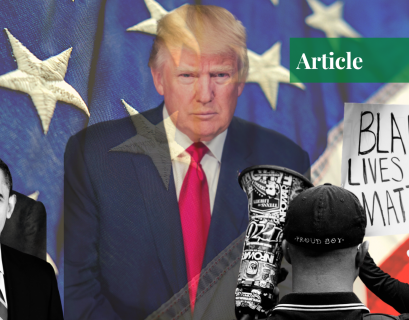 With the culmination of the U.S. elections, the ineluctable civil war seems like a reasonably credible follow-up to the grim developments of 2020. America might not even get to experience the calm that is before the storm.
Read More →